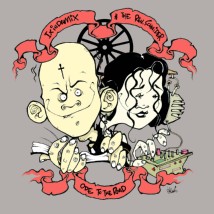 Ode to the Road

Whilst on a recent visit to the city of Marseille, travelling preacher man, The Reverend Schnider was sucked into one of the city's infamous vortexes.
When the preacher was finally regurgitated babbling incoherently at the Audiotrix HQ, Head-honcho and techno legend "Ixindamix" soon realised there was only one cure.
With this a microphone was placed into his trembling hands and a new musical adventure began.....

Ode to the Road
(1.) An Anthemic, nostalgic tale of kinship for those connected to or dis-connected from the long and winding road...
Three Men in a Van
(1.) a classic tale of modern man's struggle for identity in a confusing Post-Convoy landscape.
(2.) An inevitable set of consequences that are unleashed when more than two men partake in any form of motorised transport.
Revved Up
(1.)Hyperactivity caused by excitement or anticipation
(2.)State of being caused by substance use (usually stimulants, such as cocaine, crack or amphetamines) some common characterstics include: rapid and constant speech, jitteriness, eagerness, extreme emotions (almost always anger, excitement, happiness, or confusion), recklessness, and spontaneous actions of an unpredictable nature.